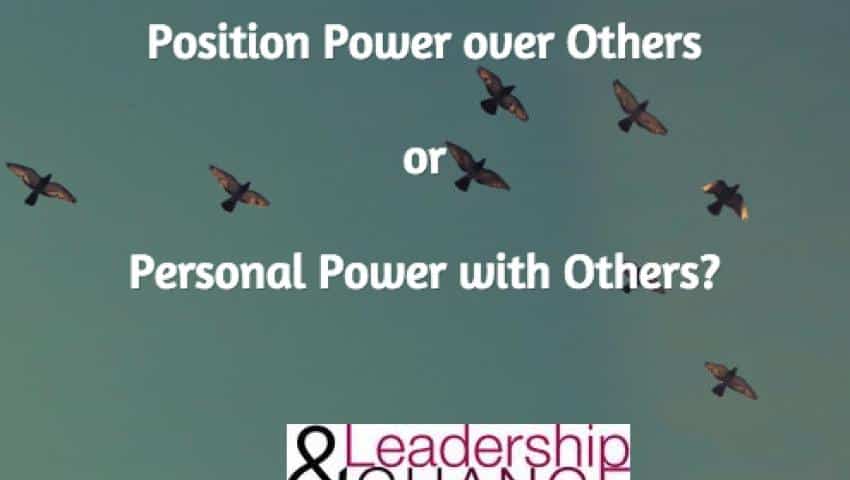 Position Power Over Others versus Personal Power With Others

A few recent experiences with large corporations made me think about power. I had to comply and adjust to one organization’s procedures - or they weren’t allowed to hire me. In another case, my contact insisted on a late-night Skype meeting even though it was very inconvenient for my schedule, and I had repeatedly told them I couldn’t make it. In all cases, my contacts were a bit indignant that I did not comply. Even though I tend to be flexible, I also have to manage my time and energy to deliver good work. Sometimes this means saying “No” - even when I thus miss out on earning their money. My prospects were stunned, to say the least. With the corporate power and money behind them, they were used to getting their way.

I read a similar post by Frederic Laloux (the author of Reinventing Organizations), the other night on Facebook. Even though he’d been clear up front about his criteria, and this corporation initially agreed, the CEO eventually wanted Frederic to drop his criteria because they were inconvenient for the CEO. When Frederic refused, he was not hired (which was fine by him).

Says Laloux: “The corporate world has the assumption that if a CEO of an 180.000 people firm wants to meet you, you obviously accept to get up at 4 am. (...)” He continues: “It’s been an interesting process for me. Earlier in my career, when I was in a big consulting firm, (...) you’d bend backward to make things work with the busy schedules of CEOs. In the four years I’ve been away from the corporate world, all of this feels weird to me now. It leaves me with a strange feeling. I almost feel like a radical, like a rebel for not playing along those rules anymore. But, on the other hand, it simply no longer makes any sense to me. I also think it’s not helpful to CEOs if we help them maintain their impression that their time is so awfully precious. I’ve seen “CEOs” of Teal (new) organizations who have lots of time on their hands, very few meetings because power and initiative are distributed widely in the organization. That’s what I wish for all CEOs.”

Let’s take a look at this interesting play of personal versus position power. But first, one remark: this blog is not meant to bash corporations or CEOs. It’s just what happens when they are used to the power play. Most professionals who work in corporations are nice people who mean well. It’s just that they are being played and overpowered, too.

Power has a negative connotation but, let’s be honest, we all need it in one way or another. Power, as defined by Bertrand Russell, is simply “the ability to produce intended effects.” We all need the power to lead ourselves, to make things happen and achieve our goals. Our individual power is closely related to the concepts of freedom and autonomy. Power in relation to others derives from either our position or our personality, skills & persuasiveness.

As an entrepreneur, author, and self-employed professional, I have the freedom to choose who I work with, and the autonomy to execute my tasks as I see fit. I derive my power from my expertise, my efforts, my results and my online reputation, but not from my position. I still praise the day 20 years ago, when I quit my job to gain more control over my life. I have no position power over others and that is fine with me. People are free to hire my services, or not. You are free to read my books and articles, or to decline them.

When you enter an organization, you swap some of your power, freedom and autonomy for your membership of this organization. In return, you enjoy a shared purpose, a framework of meanings, decision criteria and values, and a regular salary. Your daily tasks are no longer entirely under your control, nor are your decisions, the people you work with, the projects you do or the goals you set. It imposes more limitations but also more stability than being a “free agent” in a connected, volatile market. It also yields more belonging and shelter (if you join a fair organization). The fairness of this power-swap-for-membership depends on the organization (or group) you join. On a polarity scale from old to new, or from one to many: power can be held by a single CEO or by the whole organization collectively.

Push the power up

The old-single-power is the classic pyramid. What happens when you see a pyramid? The architecture leads your eye up, towards its top. The top is a single point that dominates the whole structure. In a classic bureaucracy, one leader rules the hierarchy. One leader is responsible. One leader is empowered to their maximum while the levels below them are disempowered in varying degrees. Basically, they comply with the leader. (No wonder that they are not energized, and not engaged because they are hardly empowered). Control and efficiency push power up to the top.

The new-shared-power is the currently emerging networked, or “new”, or "Teal" organization that shares power and control with everyone in the organization. Power can be divided over self-organizing teams or groups who apply consensus decision-making or inclusive dialog. Members are more empowered than in the classic pyramid: they engage in decisions and organize their tasks to achieve desired outcomes. They have more degrees of power, freedom and autonomy - they may have targets of what to achieve, but no prescriptions of how precisely to achieve these goals. All are empowered to decide together, based on everyone’s information and energy. Leadership is shared collectively or depends on the topic or is even shifted periodically. Power is spread evenly across the organization, that may even resemble a swarm. It is power not OVER others, but power WITH others. And, as Frederic noted, it frees up the CEO of these "Teal" organizations.

In between these extremes are all those organizations which combine pyramid position power with this informal, personal power. People derive personal power from what is valued, such as their expertise, their efforts, their results and contributions, their reputation, their persuasiveness, but not from their position as such. People’s position power can include democratic decision-making in teams, permission to choose their projects, and professional freedom to do their job as they see fit - in alignment with the others and the organization’s goals. Eventually though, one team leader is formally responsible for the team and may have some “additional” powers such as casting a veto during a team decision-making process.

Marcella Bremer is the co-founder of Leadership & Change Magazine and OCAI-online.com, an author and culture & change consultant.