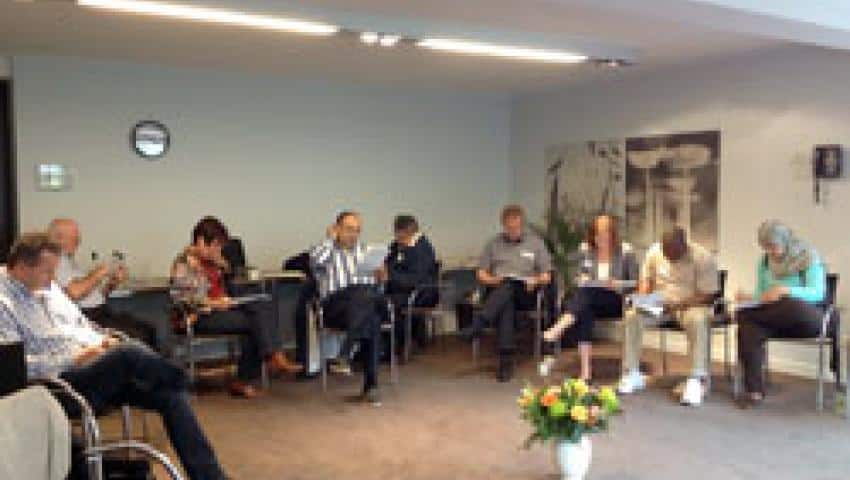 A network and new friends in our Culture Change Workshop

Last week, we did the Culture, Change & Leadership workshop in Zwolle, the Netherlands. We shared 3 intense days in a group of 14 people from 8 countries. It was awesome and amazing. Did we encounter cultural diversity? Yes - but in an inspirational way, showing different variations or angles to the same challenge. We learned a great deal from exchanging our cases. What stood our for me is how alike we humans really are. No one likes to be ordered about. People don't like top-down imposed, "command and control change" everywhere around the globe, but they will respond to the pressure in different ways.

Employees in the Netherlands, especially higher educated professionals, can be very assertive. I have seen many cases where they simply tell their boss "No, I won't do this because I don't agree." Even if they don't say so right away, they get back to their doubts later on and try to reverse decisions that have already been made. If the boss doesn't want to discuss the topic again nor reconsider the decision, rebellion or sabotage could be the next stage. Consulting employees before decision making and including them in plans and actions is vital to keep professionals engaged, motivated and cooperative.

These are rough generalizations but they were recognized by all of us during the workshop - more than I expected based on my assumptions. Yes, Dutch professionals are this headstrong. They don't like to obey and tend to know-it-all and criticize others's decisions. But all people like to be included, acknowledged and taken seriously all over the world. People like to contribute to the higher purpose of the organization and they need to belong to a group.

So I learned that employees in Chili show the same tendency to try to turn back decisions. Professionals in the United Kingdom like to ask their managers "Why?" and enter debate. Workers in Egypt like to be consulted before decision making - though they tend to accept the decision once the boss has decided, based on their contributions. Thought that doesn't count for president Morsi at this point in time. The protesters say he's not consulting his people enough. Hence the uproar at the Tahrir square in Cairo.

Our workshop participants came from Egypt, Mexico, the Netherlands, United Kingdom, Spain, South Africa, Nigeria and Canada. So we couldn't compare what organizational culture and change are like in South-East Asia. Cultural prejudice claims that this assertive attitude and the need to be included in change is not so widespread in Asia - but maybe it's not visible right away. Because people are people. Despite our differences we have very much in common. If given the chance, people like to be included in change initiatives and co-create their workplace cultures - wherever they are and even if they are not used to being consulted because it differs from the "way we do things around here".

Who else enjoys sharing and respect?

Our differences were interesting and thought-provoking, stirring creativity because they were shared in a respectful dialogue! We practiced how to create a change circle with dialogue, acknowledging all view points. That was easy with this group of seasoned fellow consultants, most of whom were self-employed.

What was our take away? It was the openness, the trust and respect, the sharing of our cases, experiences, doubts, failures and solutions. Thanks to the participants, the Culture, Change & Leadership workshop was amazing. As one of the participants, a fellow consultant, said: "I have found a great network of professionals and friends". Another self-employed consultant added: "We're not alone facing these challenges."

We're not alone in developing the workers, the workplace and thus the world. It may be a challenge but there's nothing more important than to bring about positive, inclusive, engaging change in this 21st Century... To be continued!

PS: The next workshops are in Atlanta and Zwolle.

PS2: The above workshop group has expressed the intention to gather once a year.

Culture: how do you handle paradox?