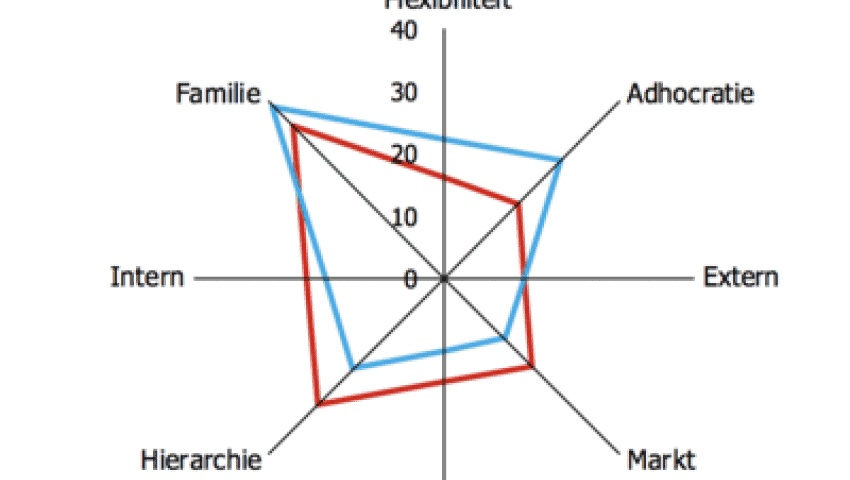 Picture a large municipality in the Netherlands with 7,000 staff. A department of about 500 people used the Organizational Culture Assessment Instrument (OCAI, © Kim Cameron) to assess their current and preferred culture. This social department is helping the unemployed citizens of this city find a job. They offer various training, upgrading of skills, and above all, a network of local employers that are trying to fulfill any vacancies. They help young people find their first job or internship, they help the unemployed that are physically impaired, and they support starting entrepreneurs in the city.

Joyce, one of their internal consultants, initiated the survey with support from the social department director. “We had several indicators that things weren’t going great”, she shares. “Looking at our absenteeism numbers, we noticed that almost 10% of our staff was absent. Analyzing this further, we found that most of these people weren’t ill. Many of them simply yearned for another position, either because they were getting older and wanted to take a step back, or because they had more potential and felt bored or obstructed…

Imagine! Our municipality offers lifetime employment so here they were: stuck for a paycheck. No longer a fit with their current position, but there wasn’t space to move within our organization. Everyone stayed put. People were demotivated and passive.”

Not enough attention for people

What was interesting, was that all other tools that this department used (and they tried several others as they love to analyze everything - talking about culture!) gave the same answer.

“That made our OCAI profile really strong. The executive team couldn’t sweep the outcome under the rug. The 360-degrees feedback that we deployed said exactly the same: there’s not enough attention for people, and teamwork, and participation. Our culture, and our leaders above all, focus on tasks and procedures first and foremost. Results are second. People feel that they come last.”

See their OCAI culture profile on top: it is in Dutch but the blue visual profile shows how they'd prefer more attention for people and professional autonomy (the upper two culture types).

To lead is to control?

“During the OCAI culture session with the executive team, they were shocked. But the profile drove the message home: this is serious, and this is true. The current executives are focused on planning and control. They cling to the hierarchy, and to the shadow side of the Hierarchy culture type. Nothing happens without a number of signatures. Everyone is waiting for others to do something. There’s analysis paralysis. Better safe than sorry, is the slogan. The executives scored low on empathy in the 360-degree feedback. They are controllers, really. Managers as engineers, instead of servant leaders, or mentors who help their people along. One of the managers walked up to me after the session with tears in his eyes. Help me do this differently, he said. I really want to change and improve my leadership skills.”

That’s why Joyce hired an external executive coach for the entire executive team who is helping them to focus more on people and their needs.

Now for some results?

A few months later, this department merged with the social workplace that offers jobs to people with special needs. The social workplace was led by interim leaders who were given a results-oriented assignment. They had to run the social workplace like a real business and make money. These interim guys weren’t from an older generation of baby boomers that were raised with hierarchical power, planning and control. They were the prototype of Market Culture leaders, and so, they too, did not pay much attention to the people side of the organization. They went for results.

Every annual appraisal focused on tasks and results. No leader ever asked an employee what they would like, or could do better, or learn…. Employees, on the other hand, were acquiescent. They were used to the top-down way of the organization, rather passive, not really motivated, and not used to taking any initiative. It was a perfect balance of stagnation. The harder the managers pushed, the less employees cared. They felt that the work was not their responsibility, they only executed it. The managers were in control, and accountable.

What would the people want?

Joyce shares that the culture is slowly changing. The executive coach works closely with all leaders, both the older men of the social department and the younger interim guys that run the social workplace. The main focus is people skills, engaging and coaching people. The format of all annual appraisals is changed to include different questions and criteria. The main question is: What would you like to do in the next year? This is stimulating a different energy. It makes people think, slowly but surely.

“The change is palpable in the executive team”, says Joyce. “I see that they are different. They give each other feedback on people skills, and on whether they have thought about: what would the people want…? This question was unheard of, a year ago.”

Their absenteeism rate is now approaching 6%. That means that presence is up! And not just by the numbers. People are more engaged at work. Their culture is developing, and people start to feel more included, and hopeful. The challenge is to keep up the good work.

This is a real client case. Joyce is a pseudonym. Her name is known by OCAI online. Her organization wishes to remain anonymous. Thank you for sharing, Joyce!

POSITIVE NOTE: The early bird for the open Culture Change Leadership workshop in May 2019 is valid! You can join us at the best rate if you're in time... Let's develop more positive workplaces!

Do you want to learn more about developing a positive culture? An important focus is appreciative attention for people. Join the Positive Culture Academy. Go to the enroll page and start the change! The curriculum can be done self-paced and with your team or organization.